A little while ago, my friend Elizabeth Wolfe asked me if I wanted to help out with a gymnastics demonstration at an art exhibition. Liz and I used to take adult gymnastics classes together at NYC Elite, and now runs Dumbo Gymnastics. 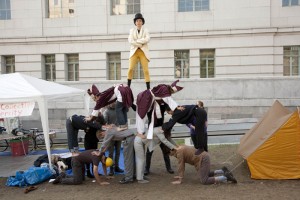 Turns out that the Dumbo Arts Center (an art gallery right down the street from the gym) was holding an exhibition by Robby Herbst called New Pyramids for the Capitalist System. It consisted of photos and drawings of people in pyramids, symbolizing the layers of a capitalist system. Robby Herbst was also influenced by his grandfather, who used to do acrobatics. 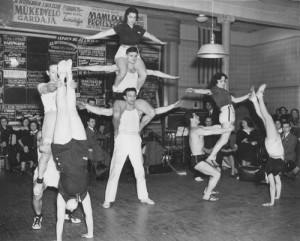 For the occasion of the 1st Thursdays DUMBO Gallery Walk, the director of DAC thought it would be a good idea to have a few real gymnasts/acrobats to complement the theme of the exhibit. So he contacted Liz, who in turn enlisted fellow instructors and students at the gym, Alden LaPaglia (a dancer who also took gymnastics classes with Liz and I), and even cheerleaders from the local high school (who sometimes goes to Liz’s gym to practice tumbling). 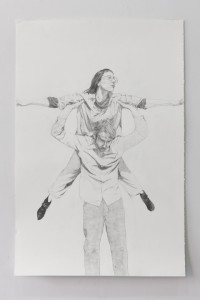 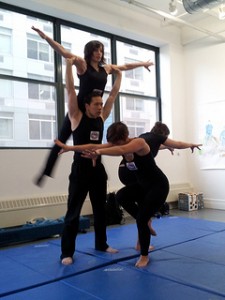 We’d talked about different things we could do, and worked out a rough outline – stretches, some gymnastics basics, and then different poses that we’d improv on the spot. Once we got there, and saw some of the poses in the drawings, we said, “We could do that!” And we did. 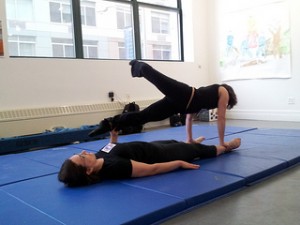 The set of improvised poses were also interesting. One person would come on and strike a pose. Then the rest of us would come in and hold complementary poses, creating a group pose. After taking weekly improv workshops at Artistic New Directions for a few months – this felt right to me – this is physical improv! 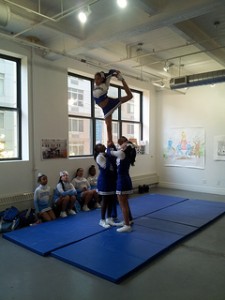 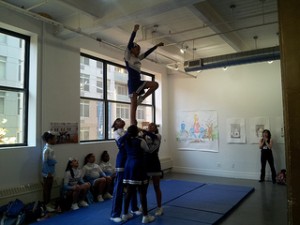 The cheerleaders got into the act too. They couldn’t do their usual routine for flips and throwing the flyers way up – because the ceiling was too low!

There was a decent amount of foot traffic as people walked amongst the various galleries. Hope they enjoyed the show! 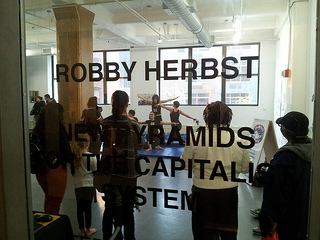 How often are you in a situation where you don’t understand the language being spoken around you? While hanging out with family and friends over the last week, I could count three distinct languages where I had to muddle my way through…

First was when my parents and I were in staying in a hotel on a day trip to Montreal. As we passed by one of the housekeepers, she asked in French which room we were in, and whether she can clean it. I was able to understand and reply smoothly, somewhat to my surprise. And down in the parking lot, another guest asked whether the parking ticket should be paid at the machine before leaving (yes). One thing I like about Montreal is that they don’t assume that you can’t speak French. Looks like those years of Alliance Française, high school and college French classes paid off.

Then we were at dimsum with some friends of my parents: a couple, and their two kids (ages 2 and 9). They spoke Mandarin. My parents did also, but my Mandarin is pretty bad (I grew up speaking Cantonese and English with my parents). At first – it was all I could do just to sit there and try to catch snippets of whatever was being said. But since I could ask my parents to help translate, I relaxed and just let the conversation flow. Towards the end, I could even make attempts at conversation. My parents said they were impressed – I wasn’t, but it’ll have to do, when my Mandarin was never that good to begin with.

Another wrinkle was that the wife in the family is deaf, and so also knows ASL. She’s pretty good at lip reading, but at times, her family would combine Mandarin and ASL when speaking with her. When speaking with my parents, she’d also sometimes write out short notes on pieces of paper when talking about more complicated topics. I do have an ASL visual dictionary at home, but this made me think that it’d be fun to take some ASL classes, say at the Sign Language Center. So many things to do, so little time!

Languages are tough to learn and maintain when you don’t have speakers to practice with. But I think it’s so rewarding to be able to converse even a little in somebody’s native language – it’s literally how they think. You’re entering their world – as a guest. It’s up to you to hold up your end and not mangle their language. If you’re lucky, they’ll appreciate your gesture.

The way I see it, time management flows from two basic principles:

A number of questions naturally comes up. Your answers says a lot about how you view time management.

How much time do you have? Nobody knows. Everybody dies at some point, so it could be tomorrow, or years from now. All you know is that your total time allotment is ticking down every second. Having lots of “free time” just means that you haven’t planned out what you’ll do next. You may decide that’s not such a bad thing – but just be mindful that the time’s not coming back.

How do you want to spend your time? The most important realization is that you do have a choice. There are a million things you could imagine doing, but only a very few you can actually do from moment to moment. So what should those be? You have to start thinking about your goals – short term, and long term. What you want from your life? If you have long-term goals, what are the intermediate steps that will help you achieve them? How is what you’re doing right this moment helping you be who you want to be?

On the other hand, don’t go overboard and stress out about how you’re not maximizing every single moment. That’s definitely not the best way to spend your time either. Enjoy your life. Just make it count.

I recently refreshed my PIM (Personal Information Management) setup, and having just finished re-reading my friend Dan Roam’s book on visual thinking (The Back of the Napkin), felt compelled to sketch out a little table:

I noticed a few interesting trends that mirror the overall evolution in how computing has affected the way we work and live:

One platform still can’t do everything. Despite Google’s dominance and the advantages of a well-integrated set of services – specific competing platforms can still be better at certain niches.